Past Performances and Reviews 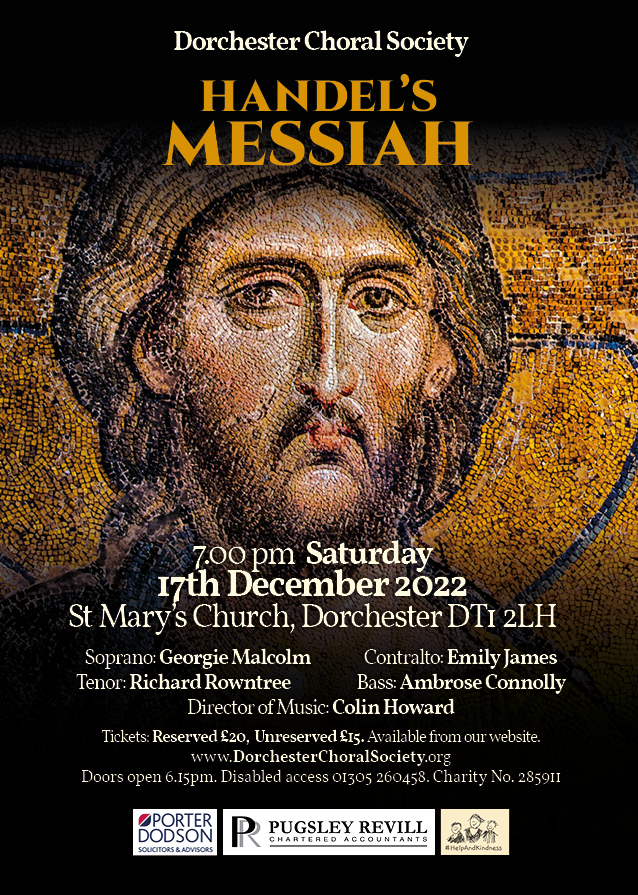 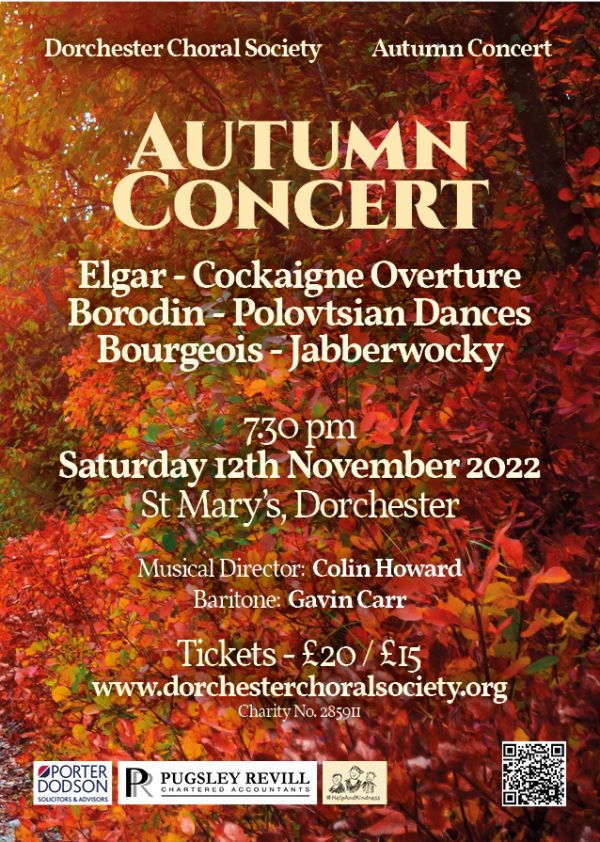 Dorchester Choral Society set their new season of music off to a magical start with a concert that brought the audience to its feet in appreciation of an evening of spectacular talent and beauty.

Under the direction of Colin Howard, the orchestra and singers took us from Elgar’s green and pleasant land to Borodin’s exotic Russian landscape and finally to the even more exotic venues and characters in Lewis Carroll’s Jabberwocky’s Wonderland.

The full orchestra performed Cockaigne’s Overture just as Elgar described it - honest and strong – giving the evening a grace and elegance that continued for the rest of the concert.

The opening melody of the Polovtsian Dances is famous for being sung as A Stranger in Paradise in the 1950s musical Kismet and Borodin’s genius was given strength and style in this performance by the singers who clearly enjoyed the vibrancy and energy of the score.

An unfortunate absence of the solo performer of Jabberwocky could have ruined an otherwise perfect evening but it was spectacularly saved by Stefan Oakes, a young member of the Choral Society who accepted the challenge and gave a remarkable rendition of the role which earned him a standing ovation.

Baritone Stefan made the best of his role as a soloist in the comic tale of the Walrus and the Carpenter which includes weird words such as brillig, fimble and mimsy, all performed by Stefan with confidence and humour, a remarkable achievement for the local young man.

On December 17th, the choral society will be performing Handel’s Messiah in Dorchester, an event not to be missed by anyone who loves beautifully performed music. 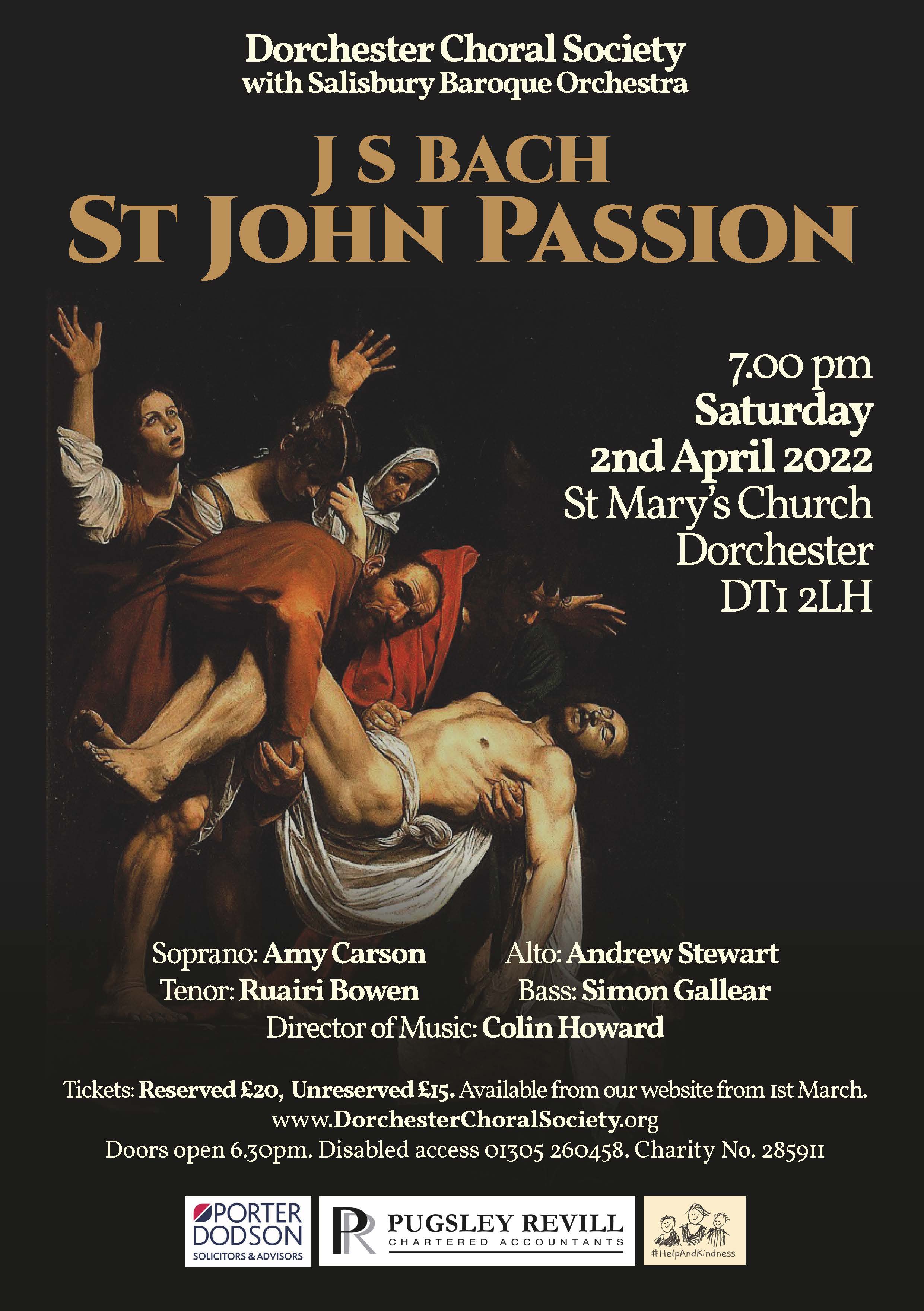 Live music for real audiences is back and Dorchester Choral Society celebrated the welcome return in glorious style.

With excellent professional singers in the four main solo roles and the choir, in full throttle throughout this noble choral work, the capacity audience clearly had a marvellous musical evening under the expert leadership of Colin Howard.

It was interesting to note that the alto role was performed in this concert by Salisbury-based Andrew Stuart who though a big man, had a surprisingly tender vocal range.

In the main choir, although the choral singers were clearly reduced from their normal generous number, they succeeded in bringing to life the powerful New Testament emotional drama of the betrayal and crucifixion of Jesus Christ.

With the work being sung entirely in German, it was sometimes rather challenging to follow but a translation into English on the programme was much appreciated by most of us although ultimately, the music said it all.

An interesting bonus to the evening was the accompaniment played by Salisbury Baroque Orchestra which included period string instruments and flutes that had a distinctive sound which gave the music an additional period atmosphere.

Forthcoming concerts by the Society include free open air performances in June and July and Handel’s Messiah in December, not to mention a join in performance of Belshazzars feast in May, a must for music lovers. 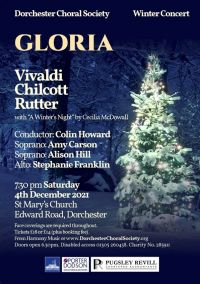 "A glorious choice of programme greeted the audience for Dorchester Choral Society's return to public attention in an evening filled with magical musical surprises.

Top of the surprise list was the energetic start to the concert which overflowed with the sounds of a brass band of eight players who took Rutter's Gloria to new levels of joyous harmony.

Singers? Yes, the generous number of choral performers were all ready to bring life and love to the evening but the early part of the concert was dominated by the big brass which continued with Gabrieli's stately instrumental sonata.  Three guest vocalists made a brief appearance in Bob Chilcott's emotionally charged Gloria with its rhythmic score while Cecilia McDowell's seasonal carols in A Winter's Night provided a welcome reminder of forthcoming Christmas celebrations.

More brass greeted the audience before the finale of Vivaldi's Gloria which brought the sweet sound of strings and singing voices in a concert that was both stimulating and deeply emotional.

Colin Howard's musical direction, as always, combined enthusiasm and precision which brings a standard of choral works that never fails to delight in these troubled times. Thank you Colin, we have missed you and it is good to have you back." 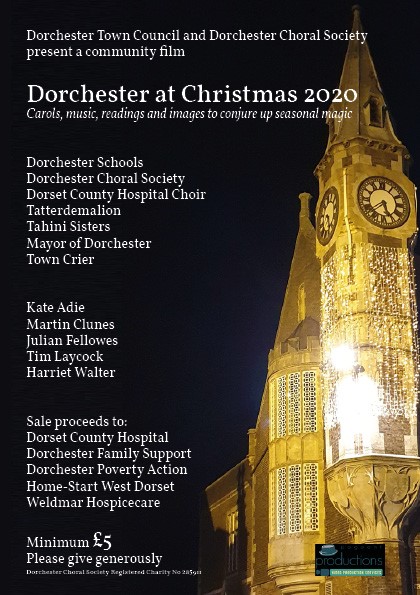 Listen on You Tube to Dorchester at Christmas 2020

The Choral Society and Dorchester Town Council worked together to bring the magic of Christmas to the town’s residents in the Covid year of lockdown.  The team put together a professionally produced film Dorchester at Christmas 2020

The choir sang traditional carols as well as "And the Glory of the Lord" from Handel's Messiah as well as MacMillan's O Radiant Dawn.

550+ copies were distributed for free to those most likely to be isolated and over £3,000 was raised in DVD sales for local charities. 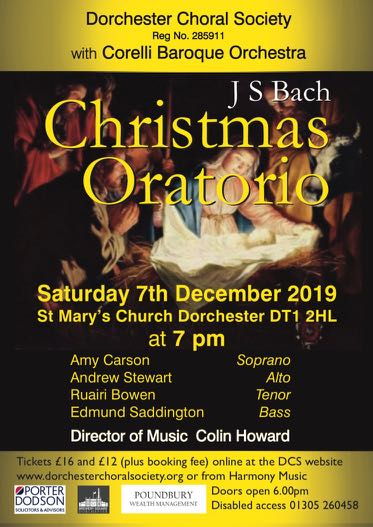 "THERE can be few better ways of acknowledging the coming celebratory season than listening to beautiful music composed by Bach and performed by Dorchester Choral Society and the Corelli Baroque Orchestra.

From the lively beginning played by the brass section to the unusual pitch of the rare oboe d’amore, the orchestra gave a performance to remember as welcome guests from Cheltenham and beyond who brought Bach’s genius to splendid life in the appropriate setting of the town church.

Under the expert guidance of conductor Colin Howard, the singing group brought dedication to this challenging work sung entirely in German, helped in every way by the four professional soloists who gave the Oratorio the joy and emotion of Christmas to the near capacity audience.

The soloists, soprano Amy Carson, alto Andrew Stewart, tenor Ruairi Bowen and bass Edmund Saddington enriched the evening and gave a certain encouragement to the audience when they were invited to sing some of the choruses.

As the choral society continues to  grow in expertise and confidence, their programme for 2020 is bound to be well supported, starting with a concert featuring Dvorak’s Stabat Mater on March 21st at the same church venue.

And for those who would love to join in the singing, there is an opportunity to do so in May when choruses from Handel and William Walton will be performed by anyone who goes along for the day, definitely an opportunity not to be missed." 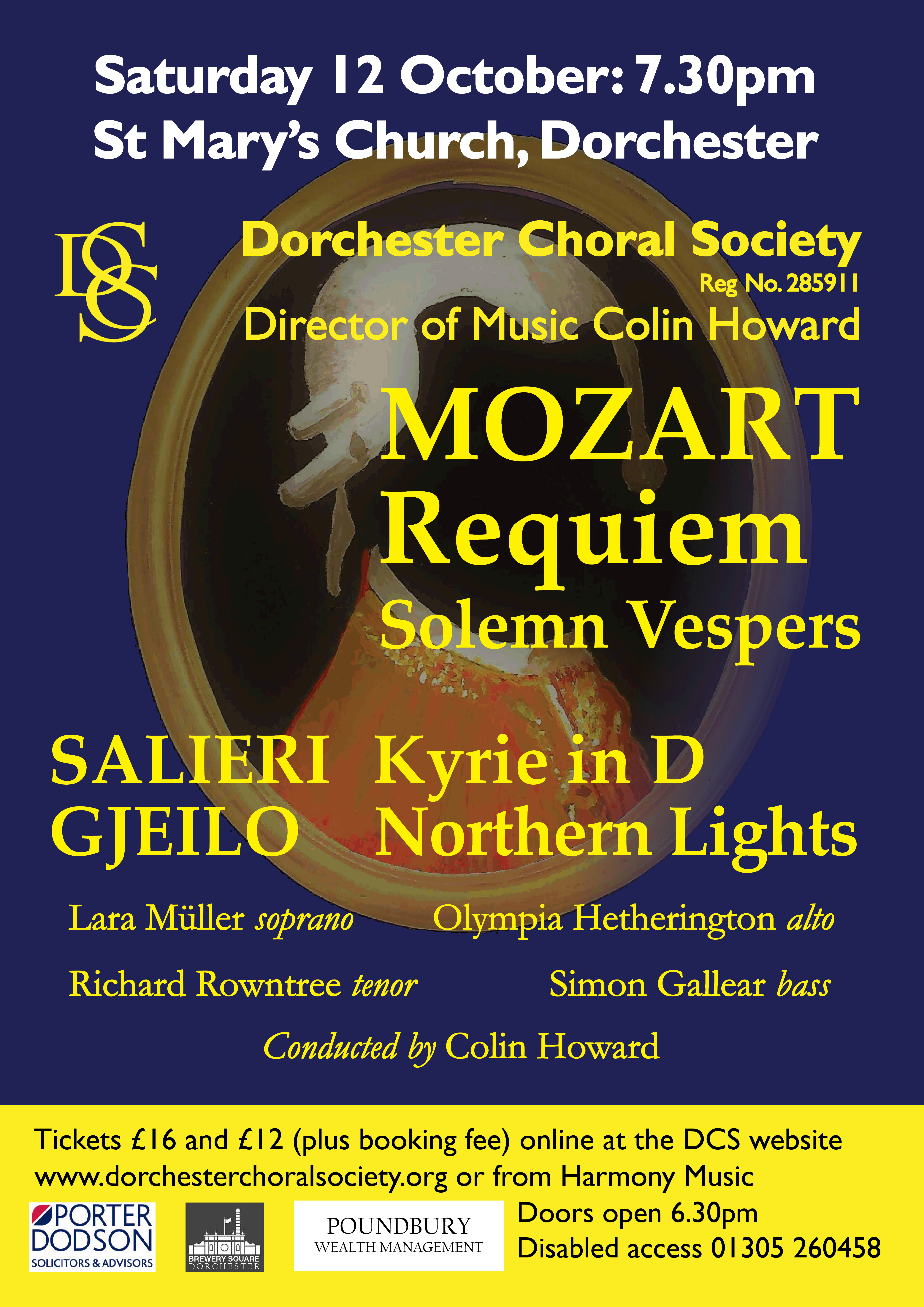 "WORLD  class music performed by a remarkably talented group of singers and musicians gave a thrilling experience to an audience on a dull wet autumn evening that turned into sublime waves of  sunshine and joy for everyone in the attending this amazing concert.

Top of the list for this carefully selected programme  was Mozart’s Requiem which was preceded by the composer’s Solemn Vespers and Salieri’s Kyrie from his Mass in D.

These devotional  works, sung in Latin,  were written to be performed as an important part of a church service but it is clear from the first few bars  of the Requiem that for Mozart, the music was really all about a theatrical performance with choral singing at a majestic pace beautifully toned in with its moving orchestral accompaniment.

Under the inspired direction of conductor Colin Howard, himself a noted vocalist as well as a valued musical  entrepreneur, the singers and orchestral members all performed with dedication and excellence, along with four professional soloists who added their expertise to the experience.

A welcome addition to the programme was a modern piece by Norwegian composer Ola Gjeilo whose Northern Lights, an unaccompanied choral work, was inspired by him seeing the stunning scene up in the heavens to which his piece lends its name.

Dorchester Choral Society will be performing Bach’s Christmas Oratorio on December 7th at the same venue which is certainly going to be a hugely enjoyable seasonal treat not to be missed by anyone who loves good music beautifully played by skilful musicians who clearly love what they do." 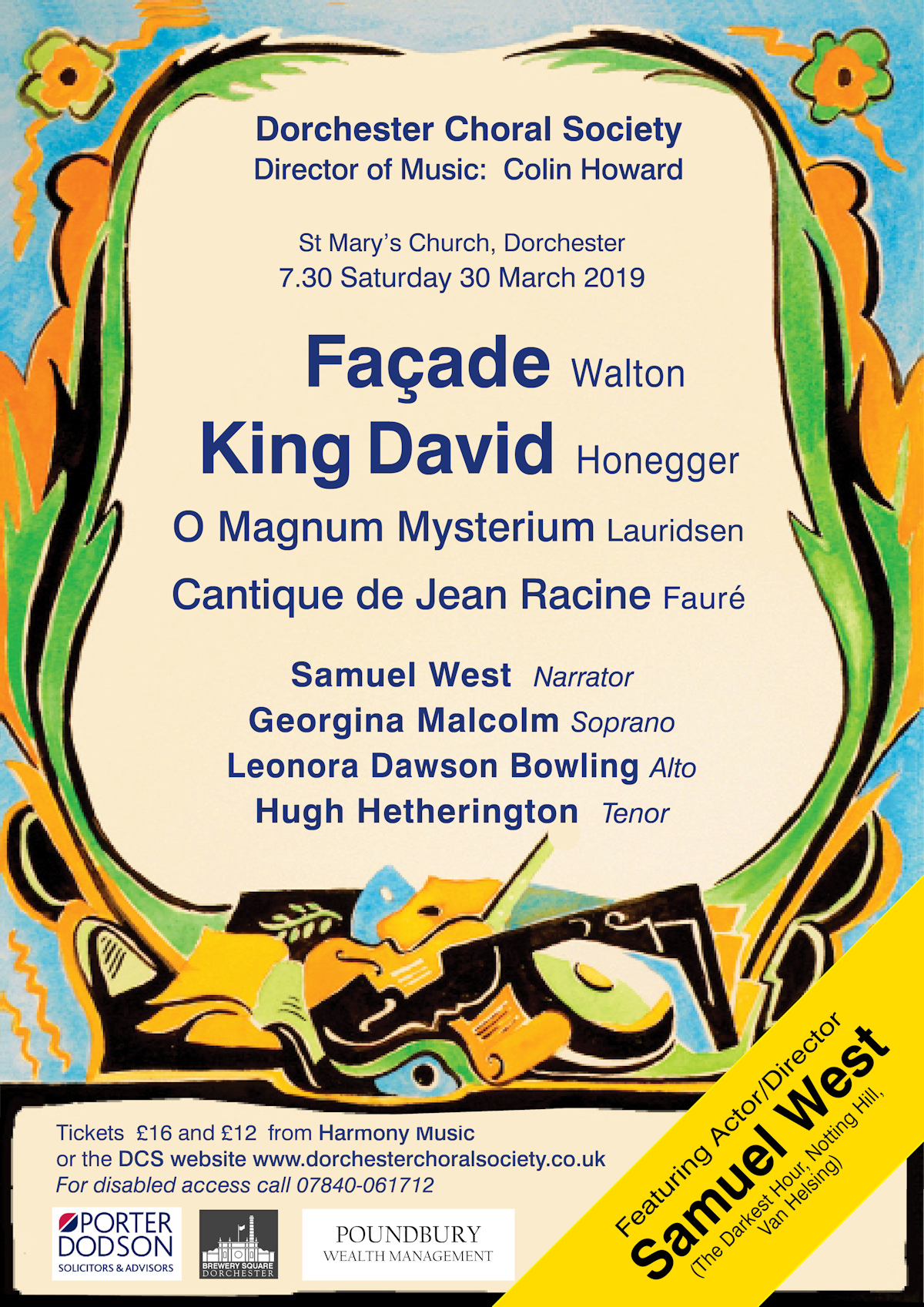 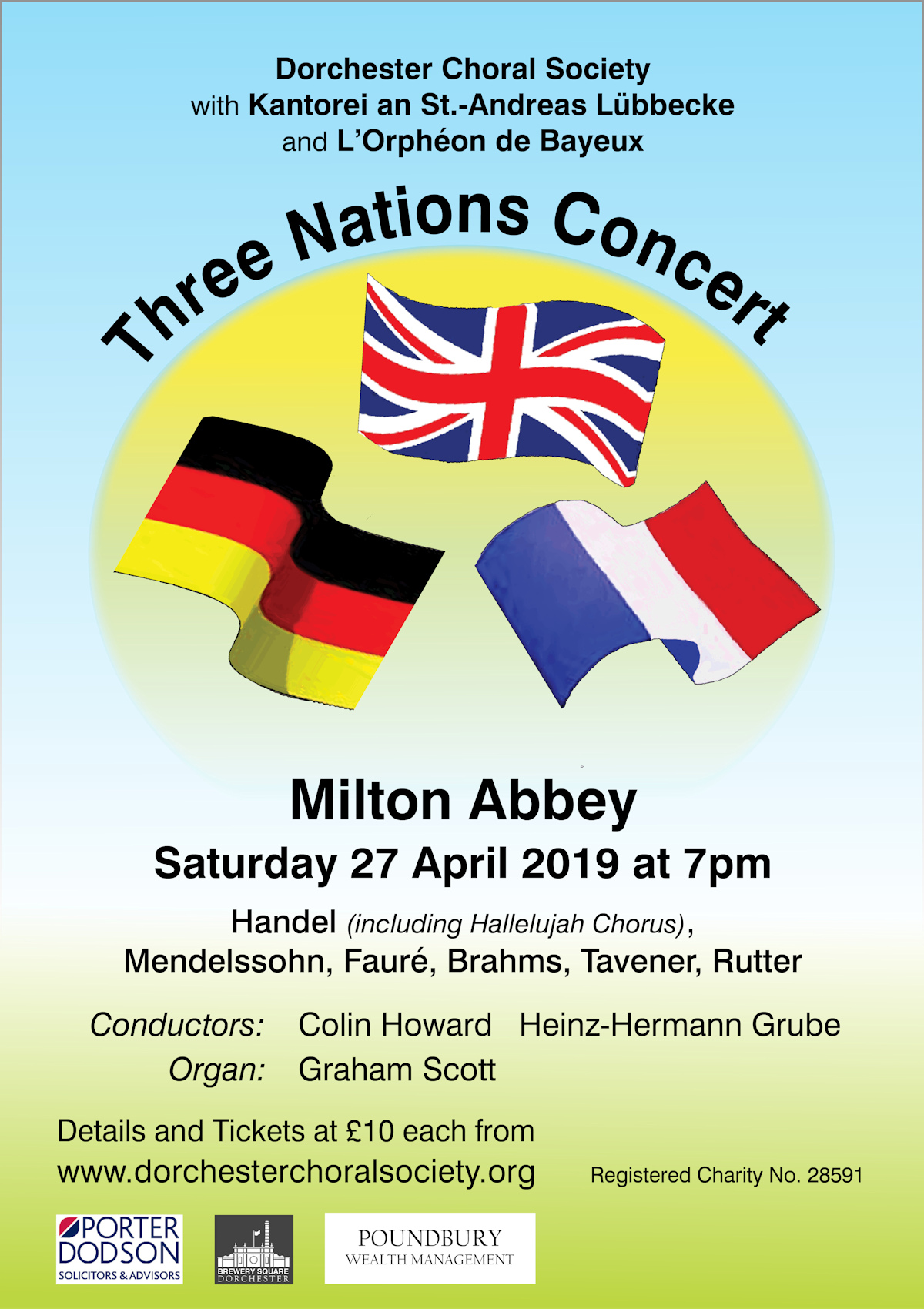 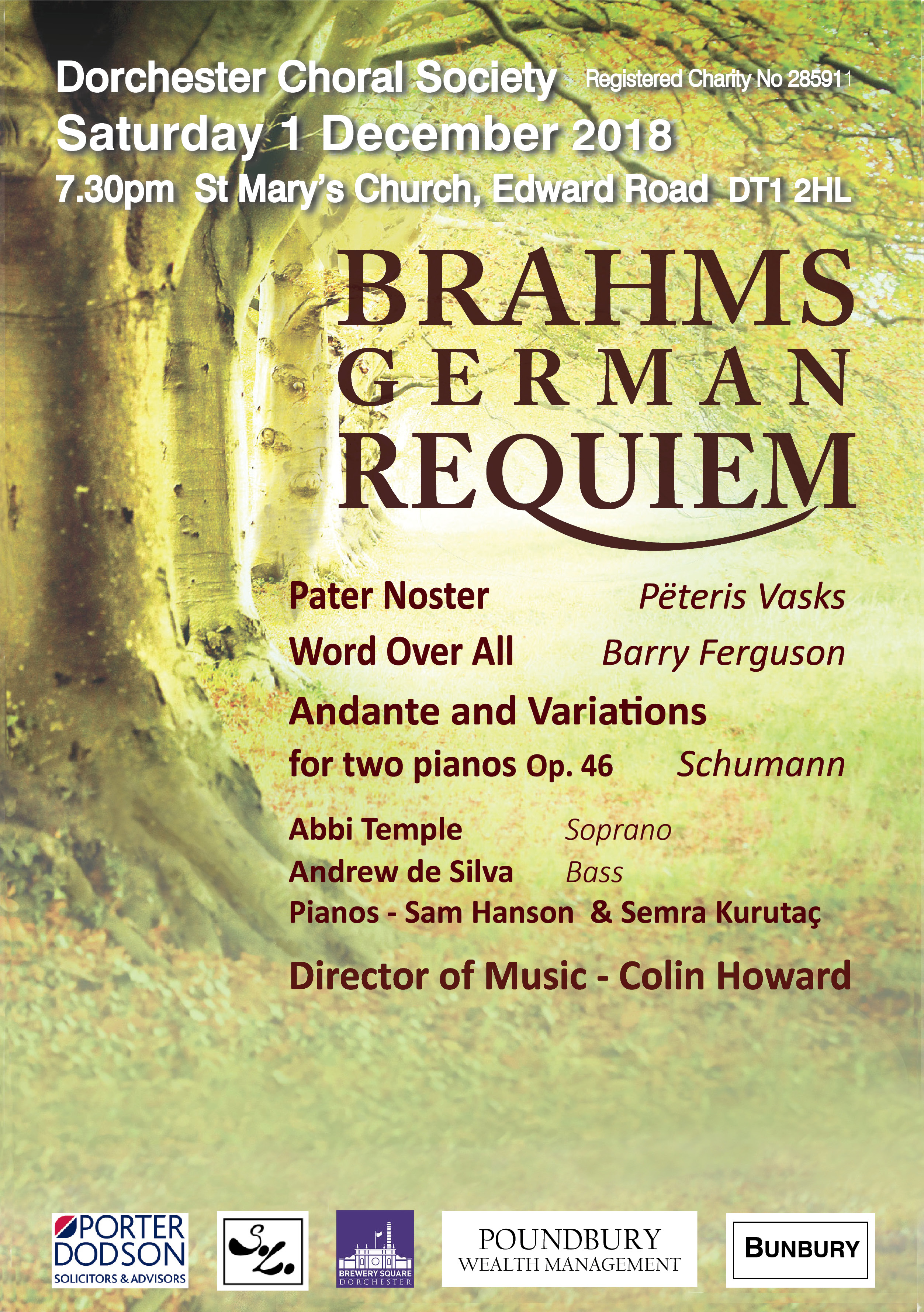 "This local 60-plus-strong choral group, with their Director of Music Colin Howard, like to play it big and Brahms’ composition, A German Requiem fills the bill nicely with its emotionally charged message of mourning and hope.

Sung throughout in German, the  work is normally accompanied by a full orchestra but this production managed very well with two pianos and a modest percussion which certainly gave the choir plenty of opportunity to be heard at full volume which was not only different but very rewarding.

A world premiere entitled Word Over All took place in the first half of the concert and it was performed in the presence of its composer Barry Ferguson who is a noted organist and composer. The composition is short but sweet and the words are a touching testimony to peace which were written by Walt Whitman.

With an acapella piece to start the evening along and a Schumann Andante for two pianos to complete the programme, the capacity audience had every reason to appreciate this fine choir which Colin Howard has brought to a professional standard."